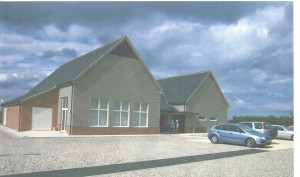 All Saints Parish Hall was officially opened by the deputy Mayor of Great Yarmouth, Barry Coleman and the Chair of Ormesby St. Margaret with Scratby Parish Council, Geoff Freeman on June  21st at an event attended by over 100 invited guests.

The completion of the Hall marks the end of a long held dream for the community which is already making use of the ‘intelligent’ facility, considered to be amongst the most modern in the country. The seaside village and its family of communities including Ormesby St. Margaret and California can boast a prestigious , flexible building with wide windows and farmland views.

The Hall has been named after All Saints Church, which served the area of the three communities before it was demolished in the 16th Century.

This website uses cookies to improve your experience while you navigate through the website. Out of these, the cookies that are categorized as necessary are stored on your browser as they are essential for the working of basic functionalities of the website. We also use third-party cookies that help us analyze and understand how you use this website. These cookies will be stored in your browser only with your consent. You also have the option to opt-out of these cookies. But opting out of some of these cookies may affect your browsing experience.
Necessary Always Enabled

Any cookies that may not be particularly necessary for the website to function and is used specifically to collect user personal data via analytics, ads, other embedded contents are termed as non-necessary cookies. It is mandatory to procure user consent prior to running these cookies on your website.